Industry In The News

Published: Thursday, December 3rd, 2020 at 10:51pm
Updated: Friday, December 4th, 2020 at 12:05am
​Copyright © 2020 Albuquerque Journal
Hunting elk in the fall is an annual tradition for many New Mexicans. Now, some hunters’ groups and U.S. Sen. Martin Heinrich, D-N.M., are pointing to a Legislative Finance Committee review of the Department of Game and Fish to revive concerns about elk hunting licenses allocated to private landowners. New Mexico landowners must prove that their property benefits elk in order to enroll in the Elk Private Land Use System, or EPLUS. Game and Fish data shows more than 4,000 New Mexico properties enrolled in the program in 2019. Those enrolled landowners can use or sell their elk hunting vouchers. Remaining licenses enter a public lottery, which favors residents and provides New Mexicans with cheaper tags. The LFC report said the EPLUS program limits the “already highly competitive lottery” and “overwhelmingly benefits out-of-state hunters” compared to programs in other states. Joel Gay, chairman of the New Mexico Chapter of Backcountry Hunters and Anglers, said the current Game Commission has been open to hearing hunters’ perspectives on the EPLUS program. “People are trying to fill their freezers here,” Gay told the Journal Thursday. “A big bull provides a lot of meat … to feed my family and my neighbor’s family.” The system’s unit-wide licenses allow private landowner licenses to extend to public land, Gay said, limiting resident hunting opportunities. Last year, about 78,000 hunters applied for 22,000 New Mexico elk licenses. “While I understand people’s concern about a private land system, the Legislature does direct us to have one,” Game and Fish Director Michael Sloane said. “There’s some sort of balance that needs to occur there.” The Game Commission last updated the program in 2018. Commissioner Gail Cramer said the restructuring was based on science and resident input. “Some of those non-residents’ tags, in fact a good portion, are donated by landowners to nonprofits to be auctioned so that those nonprofits can function,” Cramer said. Any major changes to the department’s big game hunts would occur during the next rulemaking cycle in 2022. Heinrich echoed concerns about the program in a Dec. 2 letter to Sloane and State Game Commission Chair Sharon Salazar Hickey. The New Mexico Democrat said elk licenses are sold to the “highest bidder or passed on to a well-connected few.” “The opportunity to hunt on public lands should be allocated fairly, and those able to pay $10,000 or more for a hunt should not get to buy their way to the front of the line to hunt on public lands,” Heinrich wrote. “It is wrong, it is killing the hunting tradition in New Mexico and it is high time to reform a system that effectively allows a wealthy few to outbid an average hunter’s opportunity to hunt on public lands.” 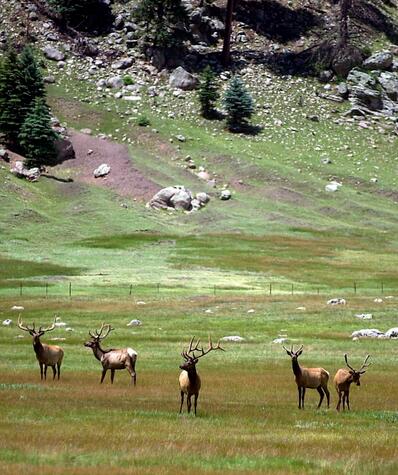 Recently, a report was published by the Legislative Finance Committee regarding a funding method utilized by New Mexico Department of Game and Fish (NMDGF) to compensate landowners for conservation practices essential to maintaining critical habitat provided to wildlife on their private property. The report prompted U.S. Sen. Martin Heinrich to write a critical letter outlining his disapproval, as well as an article (Dec. 4) by the Albuquerque Journal. Designed with input from numerous stakeholders, the Elk Private Land Use System (EPLUS) has taken the NMDGF decades to perfect and has been credited as a model system among other Western hunting states. EPLUS provides landowners with elk hunting authorizations through a system that determines the level of wildlife benefit their property is producing. The landowner must apply for EPLUS, and NMDGF conducts a physical inspection of the property to ensure the wildlife benefit. Once the authorization is awarded, the landowner is free to sell, or give, that permit to whomever they wish. Contrary to what Heinrich alleges, altering the current EPLUS program will have the most damaging impacts on small-acreage properties. Approximately 38% of the current EPLUS recipients own land 500 acres or less, and a large percentage of those are 100 acres or less. A great number of these property owners rely on revenue created from the sale of their EPLUS tags as part of their family’s annual income. These permit sales can represent $5,000 to $10,000 or more of their annual earnings, depending on the property location and number of tags. These are not wealthy absentee owners; they are hard-working rural families with great financial burdens, especially in the current COVID climate. Additionally, the impact to rural land values should be considered. Removing elk permits from a property is likely to reduce the market value of that land 40% to 50% based on current market conditions. That doesn’t just impact the EPLUS landowner, but all of the properties in the rural areas around them as comparable prices tumble and all land values subsequently decrease. To put that in perspective, if legislation or regulations changes were presented to decrease property values in the metro areas by 40% to 50%, there would be substantial push back and the proposed changes would likely stall right from the start. Why should rural New Mexicans be subject to the likely financial ruin that urban New Mexicans are not? Although rural economies will bear a greater weight, the state as a whole will suffer great loss in revenues generated through tourism, as hunting and fishing remains the highest grossing outdoor recreation tourism business in the state, an industry already on the brink of collapse as a result of the ongoing pandemic. Speaking of revenue shortfalls, it’s important to note that NMDGF does not receive any money from the state general fund. The agency’s annual budget is funded through hunting and fishing license sales and excise tax dollars produced on the sale of hunting and fishing equipment. Wildlife conservation in New Mexico is entirely funded by hunters and anglers. Criticism and potential ill-advised changes of the EPLUS system threatens a process that heavily benefits natural resource conservation efforts. It also benefits the annual budget of a self-funding state agency, in-state hunters, our crippled tourism industry and our damaged state economy – specifically economies of our especially vulnerable rural communities. Furthermore, it highlights the disconnect between urban-minded lawmakers and the reality of what is taking place in rural areas of our state. Allow me to narrow that divide by extending a bit of good advice and cowboy logic from those of us in rural and remote New Mexico – if it ain’t broke, don’t fix it. Sen.-elect Crystal Diamond represents District 35, which includes Hidalgo, Sierra, Luna, and portions of Doña Ana County. She is the former director of Sierra Soil & Water Conservation District. The Diamond family owns and operates a cattle ranch and outfitting business within the Gila National Forest.